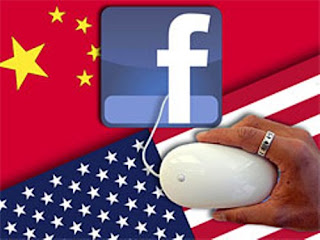 @AmericanMike: Hello everyone. My name is Mike. I’m from the U.S. I’ve just arrived in Beijing. I want to contact my family members through Facebook, but I can’t… Is there any way to get on Facebook?

@shennanyunfu: A: Go home! B: Scale the wall.

@kenneth_wang_wei：Please contact the police should you encounter any problems*. [This sentence was translated as “difficult to find the police” on an information board in a popular tourist attraction of Jiangxi province. A picture of this board was widely re-posted on cyberspace.]

@youmutianna: According to our relevant laws and regulations, your request is denied.

@anarchy_whale: If you are unable to scale the wall, you’ll have to bring your friends and family to Sina Weibo…

@yimanfu: Two methods: First, join our revolution and help us build a democratic government — this method will solve the problem once and for all, and it’ll ensure your access to Facebook the next time you’re in Beijing; second, use circumvention tools such as Autoproxy or Freegate (thanks to your government for funding these tools, which have been helping us learn a lot of truths) — this method is easy and low-cost, but I can’t guarantee it’ll always work.

@Nanyiqichidechunjie: Foreign Ministry Spokesperson: You need to obey China’s relevant laws and regulations. You can let your family members sign up for Kaixin001.com*. [Kaixin001.com is another popular social networking site in Mainland China.]

@feishangzhe: Bingo! Lost connection means you are in China.

@zengjianren: Please go to Beijing University of Posts and Telecommunications and look for President Fang Binxing.

@wonverjiaoliangxiaoxiao: I can loan you my “little dove.” [“Little dove” is a nickname of the popular free circumvention tool named “Freegate.”]

@XeonivX: If you’re unwilling to break the law, you can teach your family members how to use Renren.com*. But it takes some knowledge of Chinese language…

@Yizhangbanzhuanlian: Why the hell wouldn’t you just call them?

@Paiyunchu: It’s how it is here. Facebook has always been blocked in China for the purpose of maintaining stability. We used to be able to access it through circumvention, but since the October 1st National day is approaching, China is blocking the Internet even more desperately. So circumvention is really difficult these days. But you know, there’s Kaixin001.com in China, which is the “stabilized” copycat version of Facebook. So why don’t you invite your family members to Kaixin001? Haha! I’m not sure whether you’d understand what I’ve just said. If not, please ask some Chinese students for explanation.

@gezhidaoni: So why did you even come to China? It’s just a piece of crap here. Internet surfing in China is limited to the Great Chinese LAN–there is no external network! We can’t receive any information from the outside world! In China you can only be a frog in the well and all you can see is what’s above you! I urge you to go back to the U.S.! China’s ditch oil and 70KPH can both make you disappear without a trace! The point is: The Celestial Empire is dangerous!

@BuzhuangAbuzhuangC: Why do you need Facebook? You should watch CCTV’s News Simulcast and read People’s Daily as well as Global Times so that you can experience the superiority of socialism.

@yanwuyo: Thank you for testing our Great Chinese LAN. Apparently, it’s worth our taxpayers’ money. For someone that’s newly arrived like you, please just go with the flow. It’s such a great effort of our government. And as an American, why are you trying to access an American website in China here? You’re definitely causing trouble here. I’d like to represent the Chinese taxpayers who wish to peacefully live in the Great Chinese LAN and offer you the most tepid protest.

@Lanlingfeiniao: Isn’t he stupid? Why do you need Facebook in the Celestial Empire? Please watch CCTV’s News Simulcast, which enables you to know the entire world simultaneously. Oh yeah, let me check my Alipay* account and see if I’ve gotten paid 50 cents. [*Alipay is a Chinese third-party online payment platform that’s similar to Paypal. ]

@Zhuyili: In the Celestial Empire, Facebook has to die. [*Facebook is often phonetically translated into Chinese as “has-to-die.” (Fei Si Bu Ke, 非死不可)]

@Xiaokunjun: Hurry up and travel backward in time. It’s 1997 here.

@V-LiLLian: Scale the wall! You can jump out of the window and crouch on top of the wall, then you will be able to access Facebook.

@yimuxiaoseng: Bro, go back to the U.S. It’s Mars here.

@Tailszhihun: I have nothing else to say but asking you: what kind of madness you were in so that you have decided to come to China?

@lingzhaoran: …. my friend, this is a wrong station to get off… you should keep flying to Tokyo.

@FreeDroid: Kiddo, if you didn’t know enough about this place, you shouldn’t have come.

@Zhuanyeqihong: I’d like to suggest you call the U.S. Embassy and urge them to solve this problem. If you succeed, Chinese people will remember you.

@XTxiaotian: This place is also known as “West Korea.”

@Lee-Imagine: Haha, you should let your whole family sign up for Renren.com, so maybe they’ll find their long-lost first love.

@Yuhao: They are so considerate that they’re afraid that the Facebook server cannot handle the traffic because of China’s large population.

@-Chilanqiao-: My dear, you’ve got into the wrong country. This is a sanctuary where this is no Facebook or Twitter!

@sim_Zhou: As a host, I’d suggest you to look for Hongxing*, since she’s the only person who can scale the wall. [*Hongxing (红杏) literally means “red plum blossom” in Chinese and is used as a word game here. “Red plum blossom scaling the wall (红杏出墙)” is a Chinese idiom meaning having an affair.]
Publicada por Kongming à(s) 21:00